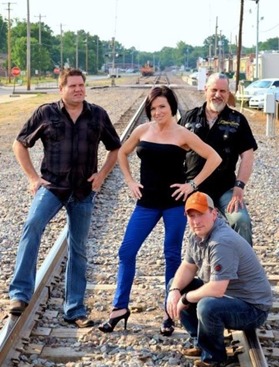 Crisis is a virtual jukebox of live music with a wide range of songs and genres including Rock, Top 40, Alternative, timeless favorites, Dance, Hip-Hop, and more.  Crisis brings a fresh powerful style that has audiences rocking out and singing along all night long.

"Crisis is a high energy band that can play for any crowd in just about any venue, for any occasion. Our shows are entertaining from the opening song and continuing all night. We absolutely love what we do and you can tell because we always have a good time."

"It started in 2005 when a co-worker approached me and said "I heard you play guitar, would you like to start a band to play in a  hotel function".  We played five songs that night and then played 35 songs one month later at a local bar.

We started off five guys with a common story and a love of Rock n Roll.  We've grown into four musicians with four different stories...  But when we get together, It feels like we've been playing together forever.  I guess the bottom line is, we love to play and ensure that everyone is having a great time.

Has brought the band into the 21st Century with his hi-tech ways.  From Pittsburgh, Pennsylvania.

Director of Security and wellness program.  From Conway, Arkansas.

​What does playing with Crisis mean to you:

"I love being on stage with T.O., Scott & Shana.  It takes me to a place that can only be described by lines written by one of the best bands in the world.  'Standing on the lighted stage approaches the un-real.'  This is how I feel when we make music together.  It is truly amazing and very... very special."

"Being part of Crisis is truly a dream come true.  Making music with these 3 amazing musicians is one of the coolest things I've ever done.  Our mission is to have fun, play music we love, make people dance and have a good time and we do that every single time we play!"

"We are family..."  Being a member of Crisis is a family affair.  We are flung out all over the country doing different things, but when we get together, it's family fun!  The best part is that we get to share that family fun with thousands of people.  The fun is infectious!  This is what makes playing with Shana, Monte, and T.O. a special event every time we get together.  I've been with this band since June 2008.